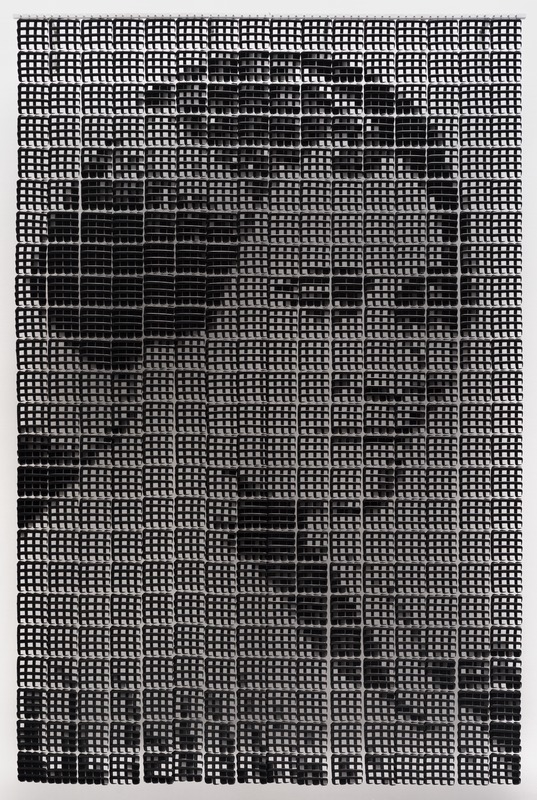 Sonya Clark composed this formidable ten-foot-tall portrait of Madam C.J. Walker entirely of plastic hair combs. Born Sarah Breedlove in 1867, shortly after the end of slavery, Madam Walker is said to be the nation’s first self-made female millionaire. Orphaned as a child and widowed with a daughter at twenty, Walker earned her fortune and fame by building a prosperous beauty empire. As a businesswoman, she employed thousands of African American women who would have otherwise been relegated to low-paying jobs. Walker flourished as an entrepreneur despite the odds, before women’s suffrage and long before the civil rights movement. Her life is captured in her famous statement: “I am a woman from the cotton fields of the South. I was promoted to the washtub. I was promoted to the kitchen. I promoted myself to the business of hair . . . on my own ground.” “I used 3,840 fine-toothed pocket combs to assemble this image of Walker, based on a photo taken around the start of her career,” Clark commented recently. “Combs speak to Walker’s career as a pioneer of hair care. I also used them because they capture our national legacy of hair culture, and the gender and race politics of hair. As disposable objects, they parallel the low social status of African American women born in the late 1800s. But together, the thousands of combs become a monumental tapestry, signifying Walker’s magnitude and success despite her humble beginnings.”