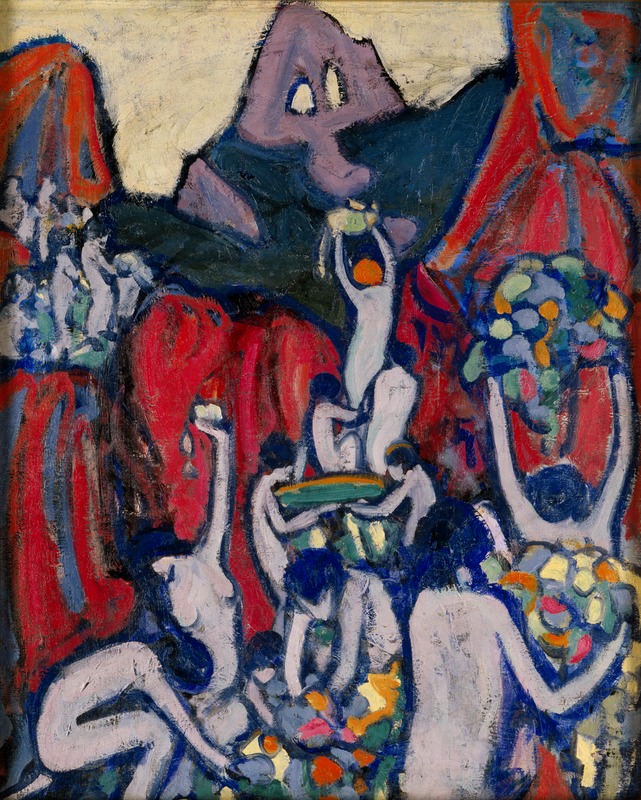 Marguerite Thompson Zorach was among the first painters to introduce European modernism to American audiences, most memorably at the 1913 Armory Show in New York City. Inspired by the “absolute unconventionality and freedom” of European avant-garde practices the artist discovered while living in Paris, Rites of Spring—Olympic Offerings is a rare example of Zorach’s early experimentation with expressionistic applications of color. Here nude figures depicted in cool blues and caustic pinks proffer the season’s harvest to an unseen divine force, providing insight into the artist’s own perception of the “inner spirit of things.”

Marguerite Thompson Zorach’s husband and fellow modernist, William Zorach, later used the back of this canvas for his own painting. According to his autobiography, the couple survived years of struggle in New York “by never spending a cent on anything that was not essential . . . we made our own canvases . . . used the stretchers over and over, rolling up the finished pictures. When desperate we painted on both sides of the canvas.” William, who enjoyed more commercial success than Marguerite, presumably used this canvas in a moment of desperation.